Yes I have 5 kids – and my vagina is none of your business! 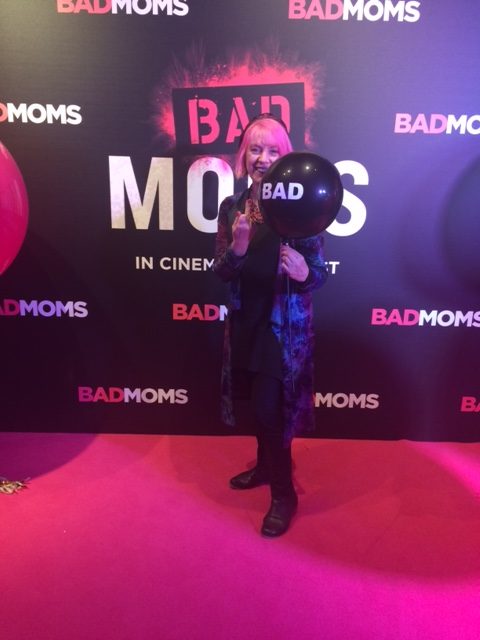 Last night I went to the premier of Bad Moms.

Written by the guys who wrote hangover, it’s a send up with the message ‘we are all bad moms – so don’t judge.’

We all try hard to make it look as though we have out shit together, but really under it all we are like ducks – floating above the pond but paddling like crazy underneath to keep afloat.

The movie was a bag of laughs as a mom with a seemingly perfect life joins forces with two other over-stressed moms on a quest to liberate themselves from the conventional responsibilities of motherhood. These stereotypical Moms became honest, real, ‘bad’ moms – as they bonded over some crazy MOMents of wild mommy debauchery. And, just like in real life, when we have the guts to take off our own masks, this gave other moms permission to ditch their own masks of perfection. The great thing was that despite being ‘bad moms’ struggling under the pressure to be perfect moms (is that even possible?) they all adored their kids – isn’t that why we all try so damn hard?

Because this was a preview, I’m not giving away the storyline but when is it OK to judge another mom? When is it OK to do this out loud? Last night at this very preview, I felt judged. Libby Gore, comedian whom I enjoy most of the time, was doing a pre -film banter – making jokes about judging mums. She asked us to put up our hands: who has one child? Then made jokes about the common judgments people with one child might experience; Then two kids – Gore has two children; then three kids; then four. And then she asked, ‘is there anyone who has five kids?” I put up my hand.   Her comment, “no wonder you have pink hair!” (WTF?) . Then she asked me to stand up. I quickly gazed behind and around the full theatre. I was the only woman standing. The only one who had five kids (maybe there was a poor woman with six kids cringing that she would be asked next). Gore then asked, “are they all yours?” (I’d be a millionaire if I had just a single dollar for every time I have been asked this – no I steal babies!). I went there – I said, “yes, they all came out of my Veejayjay .” I don’t know why I didn’t say ‘vagina’. I was on the spot, feeling uncomfortable, singled out – how many times had I experienced a teacher back in the day, yell ‘stand up’ then shame me in front of the class.

Gore then made some comment about my vagina – again WTF??

Holy shit – so now everyone in the theatre is looking at the woman standing being judged for having five kids in the first place AND having a designer vagina!  (Actually, I had a hysterectomy and a bit of ‘revision’ because after pushing out five babies all over 4 kilos, when my hormones changed at menopause I got a prolapse).

Gore then told us, “my babies didn’t come out of my vagina, I had cuts. My Dr asked if I was too posh to push. I told him I was too reticent to rip.”

I realise Libby Gore was bouncing off my awkward responses and these days, I couldn’t really give a crap that I am judged for having five kids – I am used to people looking gob-smacked. I am proud of my kids, they are grown up now. I am proud of myself too, despite my Bad MOMents . I made it through the sleepless nights with my boobs hanging out (BTW I haven’t had a boob job, just in case you are wondering); I got through the noisy days. I didn’t really yell like a Bad Mom till I got up to four kids but after that I couldn’t hear myself above their racket. Or perhaps before that I was so swimming in oxytocin from all that breastfeeding I could stay calm, even when I wandered out one day with a baby on the boob to find my three year old jumping off the bungalow roof onto a stack of mattresses with her big brothers;

I survived the ‘adventures’ like the time the boys arrived home with 2 large supermarket bags of bubble gum. They had taken stampings the size of twenty cent pieces from a local factory rubbish bin and put them in the bubble gum machines at the shopping centre – and emptied the gum machines! My kids now laugh at the teen years Bad MOMents, like the time I tracked down a 15 year old to a party in a park, late at night. I sidled up up next to my kid with an open beer can in his hand and said ‘hi!” He looked down and said, “it’s my MUM!” I asked ‘would you like a ride home? It could be embarrassing if you say ,”no”).

There were the school years – and the unschool years (I home schooled for ten years and no, they aren’t unsocialised or uneducated – the one who didn’t go to primary school at all is a psychologist and my house was always full of ‘stray’ kids). I have been pulled over and breathalysed in my pyjamas as I was driving to pick one of them up in the middle of the night. I have sat in hospital emergency rooms and prayed. But we have all made it through my Bad MOMents.

I have felt judged and I have been judged openly about how I chose to mother (they will never get out of your bed, off your boob, whatever – I can assure you it was much simpler when I knew who they were sleeping with and what they were drinking) but mostly because I have five kids, rather than what I was doing with them. When they were little, it got old quickly to hear, “don’t you have a television?” Actually we didn’t – in a bad MOMent one night when I was chopping herbs for dinner, with a baby crawling up my leg, Gilligan’s island blaring in the background and a kid yelling, “he’s got his hand on my chair!” I stepped over to the TV and cut the cord. There was a loud bang and a huge chunk out of the scissors’ blade – thank god for plastic scissor handles or somebody else might have inherited my five kids!

There was the time I dashed to the supermarket with 4 of my own plus two of a friend’s that I was baby sitting. Picture this: My friend’s dark skinned baby from Haiti strapped onto me, my red haired baby a few months older, sitting in the trolley, my dark haired daughter riding inside the trolley; my blonde haired son and his dark haired brother and my friend’s Haitian son all running alongside. As I stopped at the cheese, a man staring at us said, “my goodness, you have had a variety of experience.” I looked him right in the eye and told him, “they say, variety is the spice of life”. His wife grabbed his arm and practically frog marched him away from the cheese.

Then, there was the time I was at a friend’s birthday when the bonus baby was a newborn (that’s the baby you have when all your other kids can tie their own shoelaces and run their own baths and some can even drive a car). A man next to me asked, “are you going to have any more?” I answered, “ we really don’t know – I don’t like odd numbers.” This prick turned to the man sitting on the other side of him and said very loudly, “if that was my wife I would have made her have an abortion.” I was so dumbstruck as I sat breastfeeding my newborn, I had no words.

I really thought those days were past but no, last night at Bad Moms, a movie about judgy moms, I was judged – right down to my vagina. I don’t give a crap for myself but what about other mums right now who have a number of small children? Whatever that number is, as long as that mum is taking care of her kids and it’s not affecting you, please say something kind. Like every mother, whether she has one child or many (whatever your definition of many may be) she needs to hear, “you are doing a great job.” Take off your perfect mask and look in the mirror – we are all Bad Moms! Let’s be bad together, however many kids we have.

And if you need a good laugh, why not take your mum friends and go to see Bad Moms?

BAD MOMS will be released in Australian cinemas August 11.

‘Mum Shaming’ – it’s not all about you, unless you want it to be