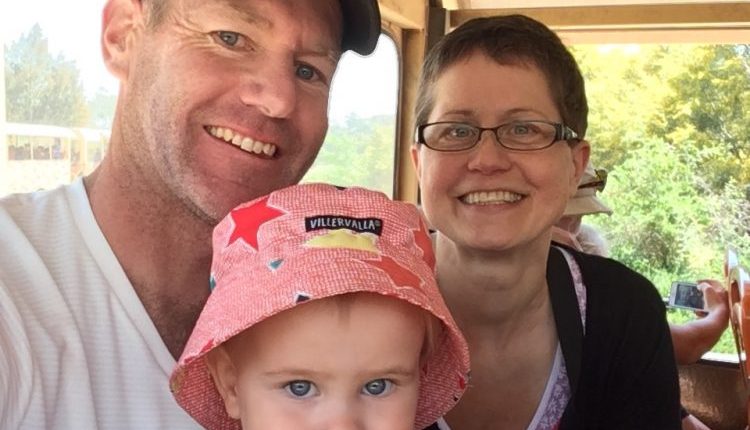 “My right breast just felt a bit fuller, perkier, it didn’t really seem ‘empty’ after feeding, There were no lumps, no redness, no dimpling, no nipple changes, it just didn’t feel right, “ says Kati Kuusisto.

As a new mum who was finally enjoying breastfeeding after a traumatic birth and a rough beginning, Kati says, “ it was such a tricky time, my husband had a busy schedule, often working away and odd hours, I was tired and sleep deprived, so I just pushed my concerns away for months. “

When a large visible lump appeared quite quickly when Laney was nine months old, Kati sought help and was diagnosed with aggressive, Triple Negative Breast Cancer. Although she doesn’t have a BRCA gene, Kati’s cancer seems very similar to cancer that her maternal grandmother had and due to the way it has responded to treatment it is most likely related to other genetic factors.

Kati’s breast surgeon explained that the cancer probably started in several spots and had gradually become one large lump. In hindsight, Kati now understands that the cancer invading the milk ducts would have affected the flow of milk in her breast and this was why it didn’t feel soft and drained after feeds. Often babies will refuse to drink from a breast affected by cancer and this may be an early warning sign but according to Kati, “Laney didn’t refuse my right breast but was always very quickly finished feeding from it. “

Kati’s diagnosis sent her and her husband Tim into shock. She says, “ I was numb. I was worried senseless. I had two weeks to wean Laney. This was so traumatic for all of us, especially at night. Timmy would sleep with our daughter and try to settle her and they would both be crying every night. Thankfully, I had received good information from reputable lactation consultants about how to wean as gently as possible. It took me about another nine months to accept the loss of the breastfeeding relationship. I had set a goal of breastfeeding for two years and I wanted Laney to have breast milk for at least a year. People’s comments that ‘at least I had got this far’ weren’t helpful. I was so worried about Laney being Ok. Because I had been mothering through breastfeeding, it was a really difficult concept to nurture and maintain that connection when we had to change everything in just two weeks.”

Kati’s mum lives in Finland and her in-laws live in the country several hours away so Kati’s mums’ group, the Southern Natural Parenting Group, stepped in with meals for Kati and Tim and donor breast milk for Laney and a nanny was organized through the government ‘In Home Care’ scheme. The support organized through a special facebook group (there are some great tips here for families with a cancer diagnosis)  and a Go Fund Me page have been very helpful in a practical sense as Kati has gone through several bouts of chemo, a mastectomy, hospital stays, discovering her cancer has now metastasized, having her lungs drained of fluid as the cancer spread and being part of an immunotherapy trial that has slowed the cancer for now.

However, the emotional journey has taken a huge toll. Kati says, “there have been lots of breakdowns psychologically, from grieving the breastfeeding relationship to treatment not going to plan – this little fucker is so persistent and finds a way around every treatment with an initial good response then it turns into something else.”

Cancer and what not to say

Well meant but unhelpful comments from people that trigger strong emotions. While comments affect individuals differently, Kati says, “ I ask friends and family to please not say, “you’re looking well” as referring to good health. I find it heartbreaking and cruel as I’d rather look like shit than be dying.

It’s ok to comment on hair or looking good in those jeans, or use normal compliments but just because I look ok and can do things doesn’t mean I’m not in pain or not dying – but that’s exactly what the reality is. Please be compassionate but think before you talk. You wouldn’t say to someone in a car accident only with severe internal injuries “you’re looking well.”

Stage IV cancer is terminal and there is no cure – only management of symptoms and improving quality of life.

Cancer and the couple relationship

Kati notes that she read somewhere that 50% of marriages fail after a breast cancer diagnosis, and says, “Tim and I really struggled, there was lots of yelling but we have found each other again and we are stronger and closer than ever. There is no one else I would rather have as a support to go through this journey. Tim has had counseling and although he was skeptical at first, it helped him come to terms with things in a practical way and he would recommend this to anyone now. It’s important to be honest, to lower expectations and to accept and respect each other’s feelings. “

Kati says, the hardest thing has been to learn to ask for help and to accept it. She says,

“we have made a commitment to accept help that is offered. We now have a sign in our home that says, ‘If you offer, we must accept’.

Despite these statistics, though, breastfeeding doesn’t mean you won’t get breast cancer or that, conversely, if you don’t breastfeed you will. If you are breastfeeding, it’s still important to do regular breast checks. And, for women who aren’t breastfeeding there are other important risk reduction practices – a healthy diet, exercise, reducing alcohol intake and avoiding smoking can all make a significant difference.

Like Kati Kuusisto, as a new mum engulfed in adjustment, exhaustion and the constant needs of a newborn, it can be easy to put your own health low on the priority list. And of course, lumps and bumps and breast changes are a natural part of the breastfeeding experience, so can easily be dismissed. However, please don’t accept that lumps or breast changes are due to mastitis or an inevitable side effect of breastfeeding, even if you are told this by a health professional.

Although lumps while breastfeeding are usually due to blocked ducts, these should clear in a few days, not linger on. If a lump doesn’t go away or you notice any changes to your breasts or nipples or if, as Kati discovered, something simply doesn’t feel right, it’s important to insist on further investigation such as an ultrasound. Kati says, “at best, you will be relieved that you are healthy, at worst, an early diagnosis could be life saving. Trust your instincts – if something doesn’t feel right, get it checked.

Pinky McKay is an IBCLC lactation consultant and best-selling baby care author. Check out her books ‘Sleeping Like a Baby’, Parenting by Heart and her ebook ‘Weaning With Love’ on her website HERE

An international, collaborative study of almost 37,000 breast cancer cases published in the Annals of Oncology in October 2015 found a 20 percent reduction in risk of developing hormone-receptor negative breast cancer for women who breastfed.

Every breastfeed is a success

Five ways your baby shows he loves you