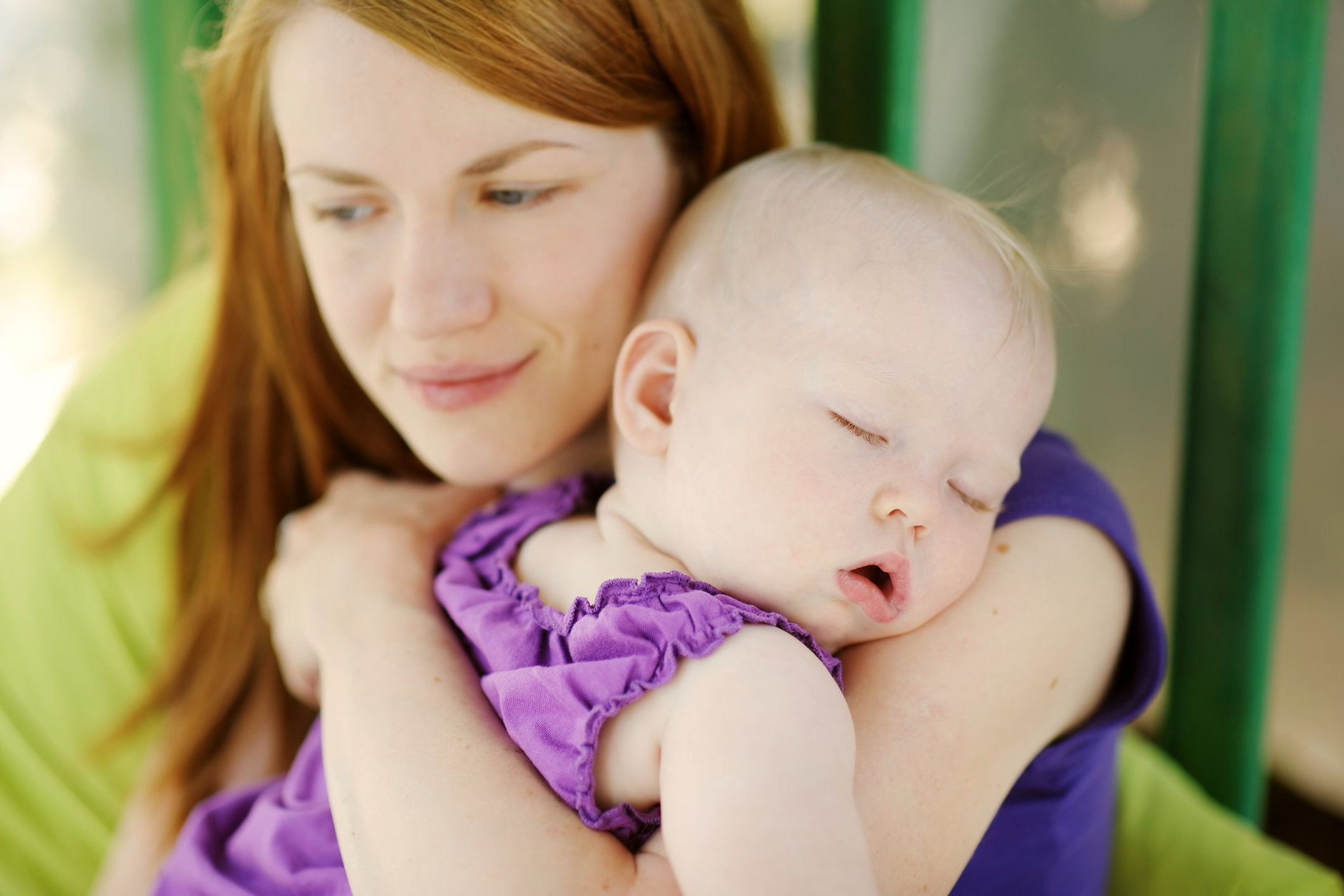 “Our first baby was fairly easy going, we had a bit of trouble getting her to sleep when she was tiny, I think because we didn’t realise how much sleep babies need or how quickly they get overtired, but it wasn’t too much of a drama and she slept well at night, which made life much easier. She did wake at night (as you would completely expect), but quickly settled after a feed. At 9 months, after I had returned to work 2 months earlier, we did controlled crying for two nights. It was so tough, but on night 3 and thereafter she slept through and we though “gee that was good,” says Alice, a mum of four.

For so many parents, like Alice, broken sleep can take its toll. With a lack of support and pressure from all sides that it will only take a few nights of ‘tough love’, sleep training starts to sound pretty darn good. But, what if it doesn’t ‘work’? Or, what if it does but there is a huge trade-off for your baby’s longer-term well-being? You see, there is increasing evidence that baby sleep training can have longer-term repercussions that can fill parents with guilt and regret, that awful feeling of ‘if only we had known.’

Although sleep training ‘worked’ for Alice’s first baby, the experience with her second baby was vastly different –and so was the outcome. She says: “he was a challenging baby from the get go, very spewy (turned out he had reflux) and rarely slept day or night. I sat with him sleeping on my chest for eight weeks straight. My bottom was permanently numb. We had feeding issues due to a problem with one of my breasts and I had to mix feed from eight weeks. But the biggest problem was the lack of sleep. He would wake six to eight times a night and was nearly impossible to comfort or get to sleep – day or night.

After three months of hell we had a maternal and child health nurse come out to help settle him and give us some advice moving forward. She couldn’t even get him to sleep! But we did see a little improvement afterwards. By six months things were worse than ever and we were absolutely wrecked. In desperation we sought assistance from a sleep consultant (locally referred to as the Sleep Nazi). She would come out to your home, spend the night with you and would then call daily for a couple of weeks to coach you and follow up. The premise was that your child would sleep through within three nights.

We saw minimal improvement, but she assured us that we were making progress and he’d soon be sleeping. So we kept at it, and at it……. my alarm bells should have been clanging by now, but in desperation and feeling like we had tried everything else and failed, we kept going and going and going. We had previously tried a soothing CD, white noise, light on, light off, sitting next to the cot, co sleeping, an osteopath and more……..so many things! “

Alice says, “I now realise that we let expectations and what everyone else’s babies were doing make us feel like we were failing. That having zero support from family or friends (they live hours away) left us exhausted, defeated and willing to do anything but I had no idea to what extent it would affect my gorgeous golden haired boy.”

Alice’s son is now 6, is suffering anxiety, OCD like symptoms, inappropriate responses to everyday events and situations and difficult behaviour. She says, “he’s not able to concentrate at school unless he’s got one on one attention and is falling behind. He can’t cope at all if he feels we are going somewhere without him or he is being rushed, saying over and over “don’t leave me!” – it’s really difficult to live like this, but more so, to see him live like this. We are currently waiting to have him assessed by a series of medical Professionals who will hopefully equip us with the skills and coping mechanisms to help our son.

“His behaviour affects the whole family, particularly his siblings, but also my husband and I. It’s stressful, embarrassing and difficult to not react to his behaviour. But most of all, it’s heartbreaking! We honestly believe, and our Doctor agrees, that sleep training and the duration of our attempts play a significant part in his temperament and behaviour. It’s really difficult to hear that, to admit it and know it was our choice to do it. I feel as though I have let my son down and I second guess myself whenever I question why it worked so easily for our daughter – were we just lucky? Or did she simply give up trying to get our attention?”

‘Harm’ as Alice describes cannot be proven but there is research showing that children with anxiety disorders have a higher level of sleep difficulties as infants. Although these studies weren’t about controlled crying and I am making no direct connection, perhaps some of these babies, like Alice’s son, who are presenting with sleep difficulties are infants who need extra help to regulate their emotions or are more sensitive to stress, so it is possible that these little people would be more at risk if they were exposed to controlled crying. Perhaps there was already a problem and sleep training is a neutral factor in the issues Alice’s child is now experiencing. However, it is devastating that any mother has to bear guilt and doubt about her ability to protect her child, especially when she had limited resources and support at the time she was desperately  in need of help.

As well as immediate risks of sleep training such as overheating and vomiting due to extreme distress, there is increasing evidence of potential longer term effects on infant brains, stress regulation mechanisms and attachment. According to Darcia Naevez, Professor of Psychology at the University of Notre Dame, Indiana, “with neuroscience, we can confirm that letting babies get distressed is a practice that can damage children and their relational capacities in many ways for the long term.”

Babies need our help to learn how to regulate their emotions, meaning that when we respond to and soothe their cries, we help set the expectation that when they are upset, they can calm down, with our help. On the other hand, when infants are left alone to cry it out, they fail to develop the understanding that they can regulate their own emotions. This is why ‘self-soothing’ depends on neurological maturity that is achieved through responsive nurturing, not ‘training’ by leaving babies to cry alone.

There is also compelling evidence that increased levels of stress hormones such as cortisol may adversely affect the development of synapses and cause permanent changes in the stress responses of the infant’s rapidly developing brain – a full term newborn only has 25% of its brain developed and brain growth will increase about three times as large by the end of the first year.

English psychotherapist, Sue Gerhardt, author of Why Love Matters: How Affection Shapes a Baby’s Brain, explains that in normal amounts cortisol is fine, but if a baby is exposed for too long or too often to stressful situations (such as being left to cry) its brain becomes flooded with cortisol and it will then either over- or under-produce cortisol whenever the child is exposed to stress. Too much cortisol is linked to depression and fearfulness; too little to emotional detachment and aggression.

One of the arguments for using controlled crying is that it ‘works’. Controlled crying and other similar regimes (under a whole range of more benign labels – controlled comforting, controlled soothing, responsive settling and others that none-the-less ignore or dismiss the baby’s attempts to communicate a need for comfort, food or help to make a transition to sleep), may indeed work to produce a self-soothing, solitary sleeping infant. However, It is the very principle that makes controlled crying ‘work’ that is of greatest concern: when controlled crying ‘succeeds’ in teaching a baby to fall asleep alone, it may be due to a process that neurobiologist Bruce Perry calls the ‘defeat response’. Normally, when humans feel threatened, our bodies flood with stress hormones and we go into ‘fight’ or ‘flight’. However, babies can’t fight and they can’t flee, so they communicate their distress by crying. When infant cries are ignored, this trauma elicits a ‘freeze’ or ‘defeat’ response. Babies eventually abandon their crying as the nervous system shuts down the emotional pain and the striving to reach out.

One explanation for the success of ‘crying it out’ is that when an infant’s defeat response is triggered often enough, the child will become habituated to this. That is, each time the child is left to cry, he ‘switches’ more quickly to this response. This is why babies may cry for say, an hour the first night, twenty minutes the following night and fall asleep almost immediately on the third night (if you are ‘lucky’). They are ‘switching off’ (and sleeping) more quickly, not learning a legitimate skill like learning to swim or ride a bike, for instance. And, even though the baby stops ‘protesting’ (read, crying for help), it does not mean the baby is not stressed.

A 2012 study by Wendy Middlemiss and colleagues  found that even though babies slept after sleep training, they continued to experience high levels of physiological distress, as reflected in their cortisol scores. Middlemiss, Associate Professor of Educational Psychology at the University of Northern Texas, says, “overall, outward displays of internal stress were extinguished by sleep training. However, given the continued presence of distress, infants were not learning how to internally manage their experiences of stress and discomfort.”

Whether sleep ‘success’ is due to behavioural interventions such as ‘sleep training’ or whether the baby is overwhelmed by a stress reaction, the saddest risk of all is that as he tries to communicate in the only way available to him, the baby whose signals for comfort are ignored in order to teach him to sleep will learn a much crueler lesson – that he cannot make a difference, so what is the point of reaching out. This is learned helplessness.

The Super Baby Hoax – and what’s the difference between healthy experiences and pushy parents?

The Truth About Sleep Training

Attachment Parenting – what does it really mean?